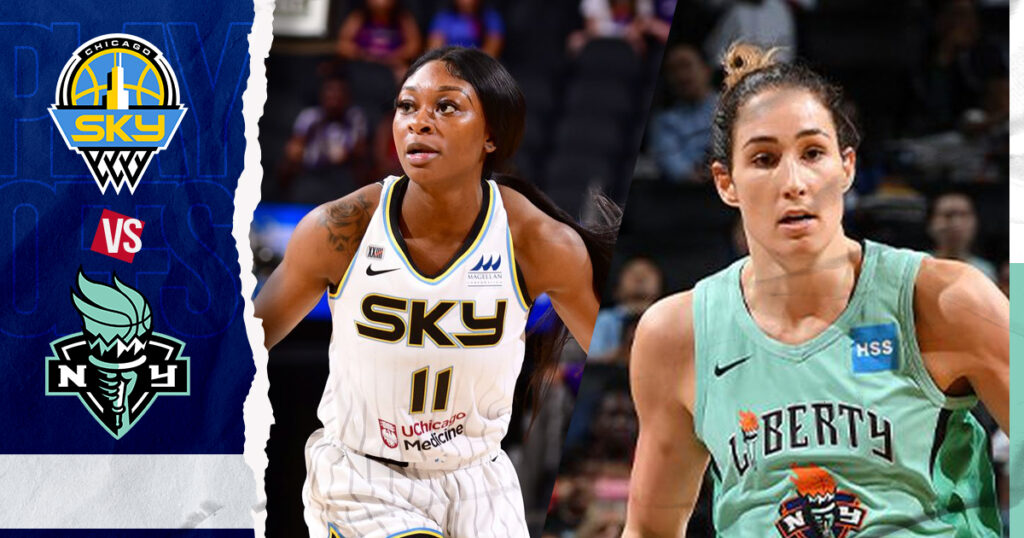 The defending champs: The WNBA is in full swing, and we must acknowledge the effort these incredible players put in for this show. The WNBA players’ salaries are lower, and these players must search for other alternatives. Anyway, we’ll get to it later; for now, let’s look at the game between the Chicago Sky and the New York Liberty. The Sky dropped their first game 91:98 in overtime, but sophomore Dana Evans shone with a 24-point performance. The Liberty, on the other side, put on a stunning display, defeating the fearsome Sun 81:79, with Sabrina Ionescu scoring 25 points. Can the reigning champions Sky pick up their first victory of the season?

Sky has both experience and depth.

Emma Messeman was a tremendous acquisition for the Sky; she is one of the most gifted players in the world and put up 12 points, 8 rebounds, and 5 assists against the Sparks. And, of course, the ageless and yet hungry Candace Parker demonstrated her all-around skill with 21 points, 6 rebounds, and 6 assists, proving she is one of the league’s best. But it was sophomore Dana Evans who stole the show with 24 points, 5 assists, and 4 steals.

The defending champs: Courtney Vandersloot had an unusually slow start to the season, turning the ball over eight times while handing out eight assists and shooting just 2/7 from the field. The club was without Allie Quigley and Kahleah Copper, two key players who helped the team win the title previous season. Nonetheless, Emma’s acquisition will be significant in terms of overall danger. What will the mix be when Quigley and Copper return? Will Messi serve as the sixth player? Or will the Sky go with Azura Stevens, who finished with 13 points and 6 rebounds?

Liberty was outstanding in the opening.

The New York Liberty played a high-quality game against the Sun, and that win may help set the tone for the season. Sabrina Ionescu seems much more in control this season than she did last, displaying long-range shooting, mid-range power, and some gorgeous finishes with either hand. She finished with 25 points, 6 assists, 4 rebounds, and 10 of her 18 shots. Natasha Howard continued to shine with a 16-point, 6-rebound performance.

The Liberty were at their best on defense, though, and the fans enjoyed what they saw in the opening game. The second quarter effort in the last game was particularly noteworthy. Also, if Sam Whitcomb can average 10-15 points every game, Ionescu and Howard will benefit greatly. Meanwhile, Stefanie Dolson’s defensive efforts as a tough middle player may be important.

Range of Points: Although the Sky had more experience than the Liberty, the latter showed a lot of potential on both sides of the floor in the first game. The Sky will be difficult to stop for the Liberty with Parker and Messeman, and Sabrina Ionescu will need to come up with another exceptional game, as she appeared unbeatable to open the season. The Liberty looked fantastic in the half-court setting, and Sky has so many amazing triple-threat players who can flourish in such a situation. I envision this as a high-scoring game with a range of 160-170.

Prediction: The defending champs: The Liberty looked hungry in the opening, and having Sabrina perform like she did in the last game would likely alleviate some of the management’s concerns. The club is still not looking like a title contender, and they will play a team that won the championship last season, but they have a lot of promise and are much more promising than last season. I envision a thrilling and tight fight here, with the Sky eventually prevailing 87:83. OKBET Sportsbook allows you to bet legally online.

OKBET recognize that betting and gaming are forms of entertainment. Set up in 2021, OKBET is now an established operator with a team of qualified, experienced professionals who strive to provide our customers with the best online entertainment experience through excellent product offering and also superior customer service.
Menu